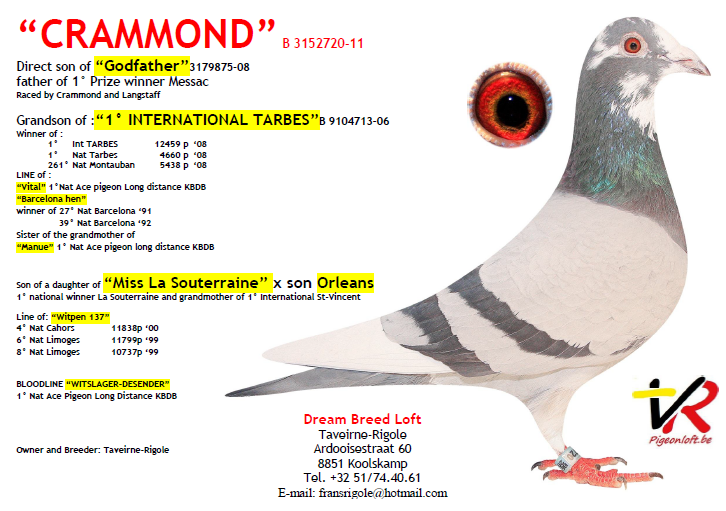 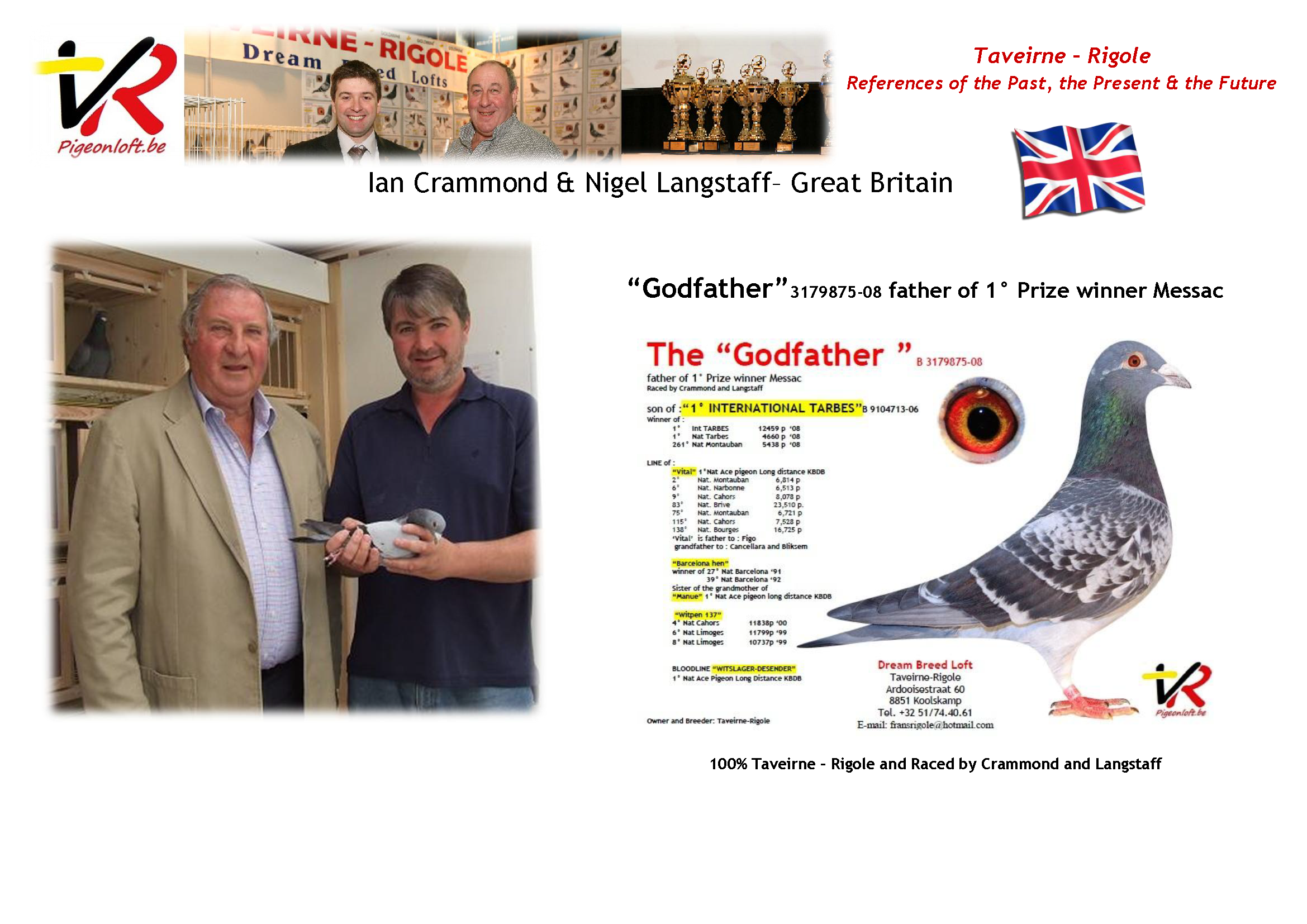 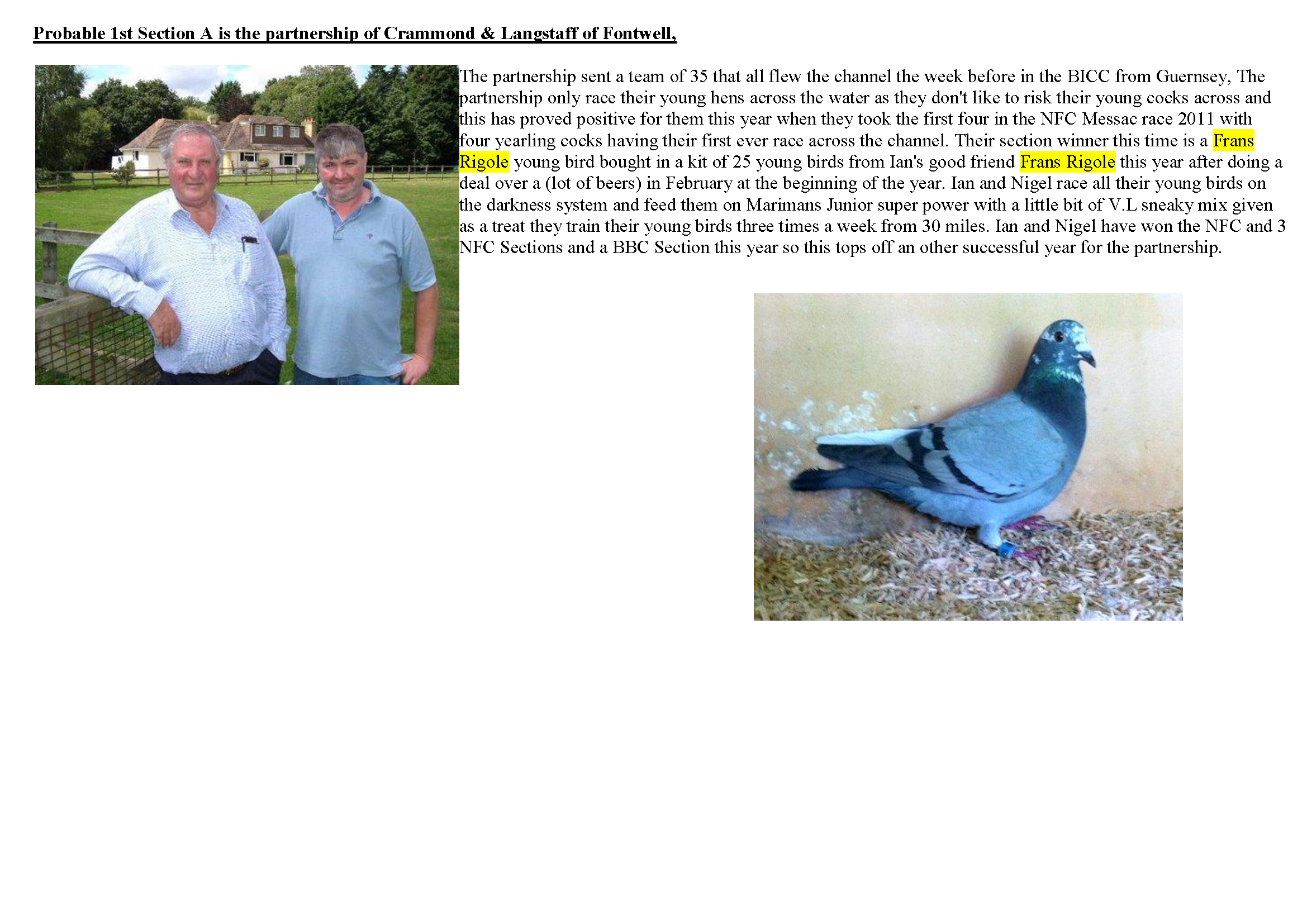 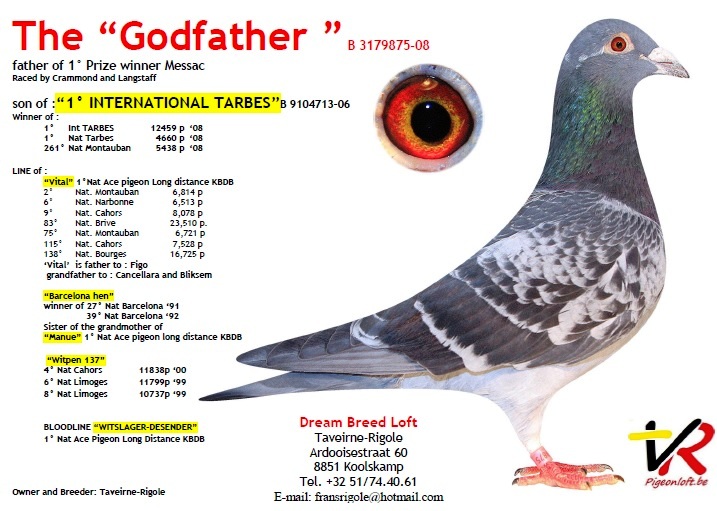 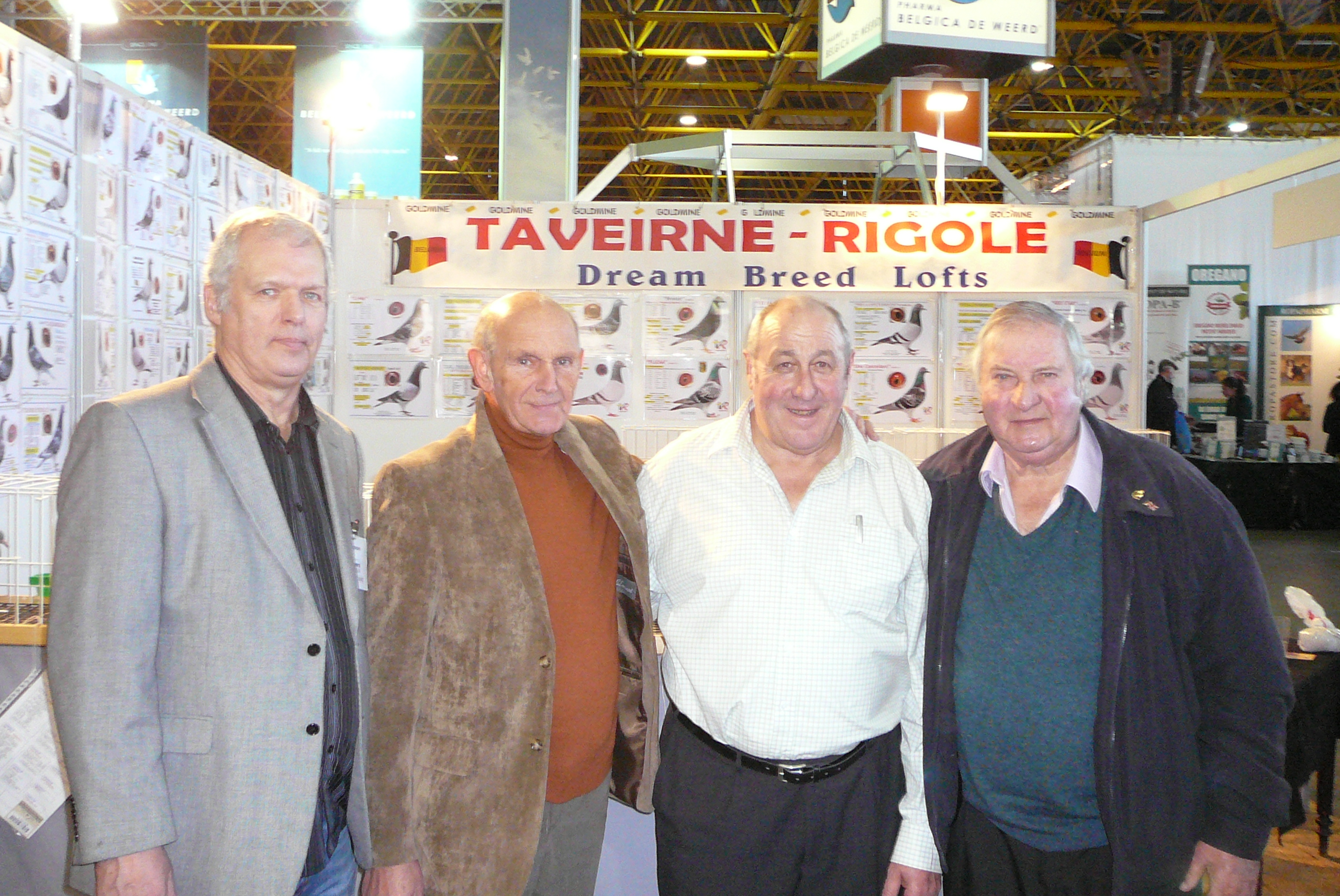 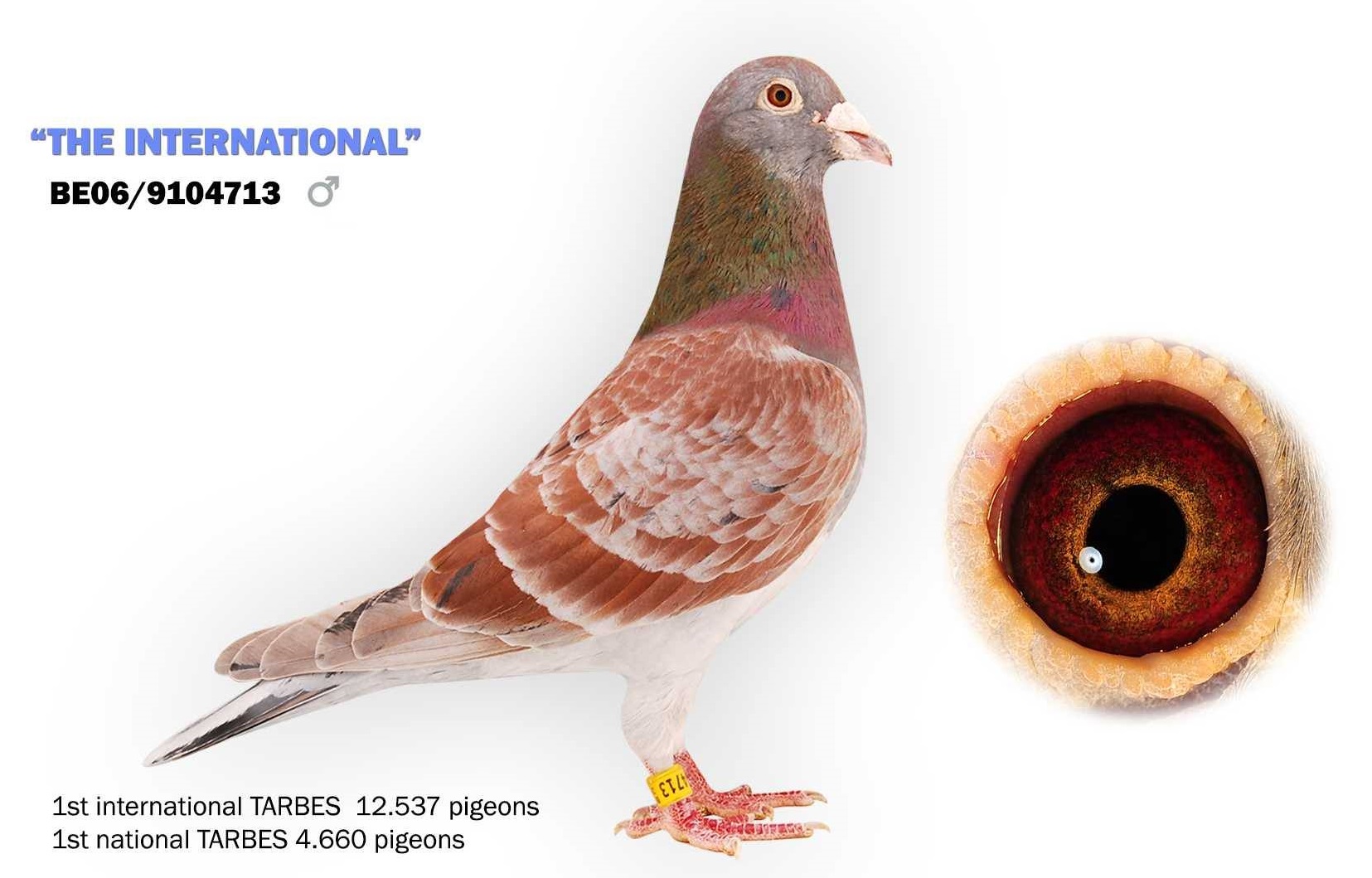 Probable 1st Section A is the partnership of Crammond & Langstaff of Fontwell, The partnership sent a team of 35 that all flew the channel the week before in the BICC from Guernsey, The partnership only race their young hens across the water as they don’t like to risk their young cocks across and this has proved positive for them this year when they took the first four in the NFC Messac race 2011 with four yearling cocks having their first ever race across the channel. Their section winner this time is a Frans Rigole young bird bought in a kit of 25 young birds from Ian’s good friend Frans Rigole this year after doing a deal over a (lot of beers) in February at the beginning of the year. Ian and Nigel race all their young birds on the darkness system and feed them on Marimans Junior super power with a little bit of V.L sneaky mix given as a treat they train their young birds three times a week from 30 miles. Ian and Nigel have won the NFC and 3 NFC Sections and a BBC Section this year so this tops off an other successful year for the partnership

” Both Ian Crammond, Nigel Langstaff and John Tyerman have known Frans Rigole and Guillaume Vanneste for many years,  and since the formation of their famous « Dream Breed loft Taveirne- Rigole » stud  they have provided top quality stock and prize winners to numerous fanciers all over Europe and further afield.   They have many top National Prize winners at stock  with excellent results being reported by fanciers who have purchased from Dream breed lofts.   They are honest fanciers of the highest integrity and a fair deal is assured to anyone who purchases birds from them.   Anyone looking for top quality pigeons at reasonable prices should visit the lofts at Koolscamp where the hospitality is excellent.” 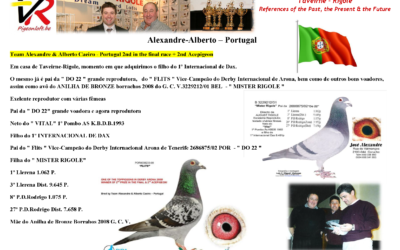 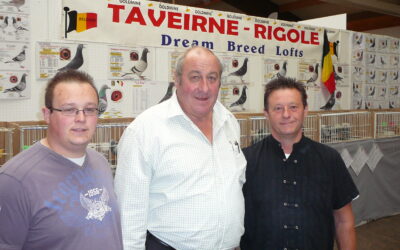 John Tyerman Ian Crammond and Nigel Langstaff  - UKNoel & Adam Gaunt are performing very well with the offspring Vanneste-Rigole from Dream Breed Loft Taveirne-Rigole. Yearly Mr Noël and Adam Gaunt are looking to introduce something good on their pigeonloft  to be... 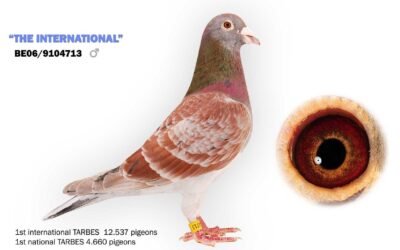