The backery of Gust and his father had to be renewed and they needed a bigger space to make it more professional; so they needed to buy a piece of land which was for sale just next to their house. Price for this land was 15.000,- euro ( 600.000,- Belgian francs in those days ).
Several nights, Gust couldn’t sleep because he knew that the Number-1 pigeon of Belgium, 1st National Ace Pigeon K.B.D.B. Long Distance , called “Witslager Desender” 845/70  was for sale ! His records – see above.

So instead of buying the piece of land, Gust wanted to buy to Best Pigeon of Belgium; “Witslager 845/70” means “White Wing”. When he arrived at the house of Mr. Desender he notices that Mr. Desender was drinking champagne together with a japanese pigeon fancier, like they were celebrating something … Gust felt very bad , because he thought that the “Witslager Desender” was already sold.  But when Mr. Desender told him that the pigeon wasn’t sold yet, Gust took the huge amount of money of 600.000,- Belgian francs out of his pocket and spread it on Mr. Desender’s table, just like with a card game. At the same moment the japanese fanciers was drinking of his glass of champagne … when he saw what Gust was doing he almost got crazy and started shouting: “I am the buyer and nobody else!”. Gust asked Mr. Desender if he was happy with this amount, put the pigeon in his basket and went away. Again the international pigeon world was in shock ….

Gust realized that he had done the best deal in his pigeon carreer, because the “Golden Triangle” was closed now:  two 1st National Ace Pigeons and 1 Olympic Pigeons were at his loft now : Gust realized that he had made the strong basis now to breed top winners. And that’s exactly what happened; still today , after more than 30 years , Gust and his new pigeon partner Frans are breeding 1st National winners and top-pigeons out of the combination of “Blauwen Angoulèmer” x “Eén-Witpen” x “Witslager Desender”. 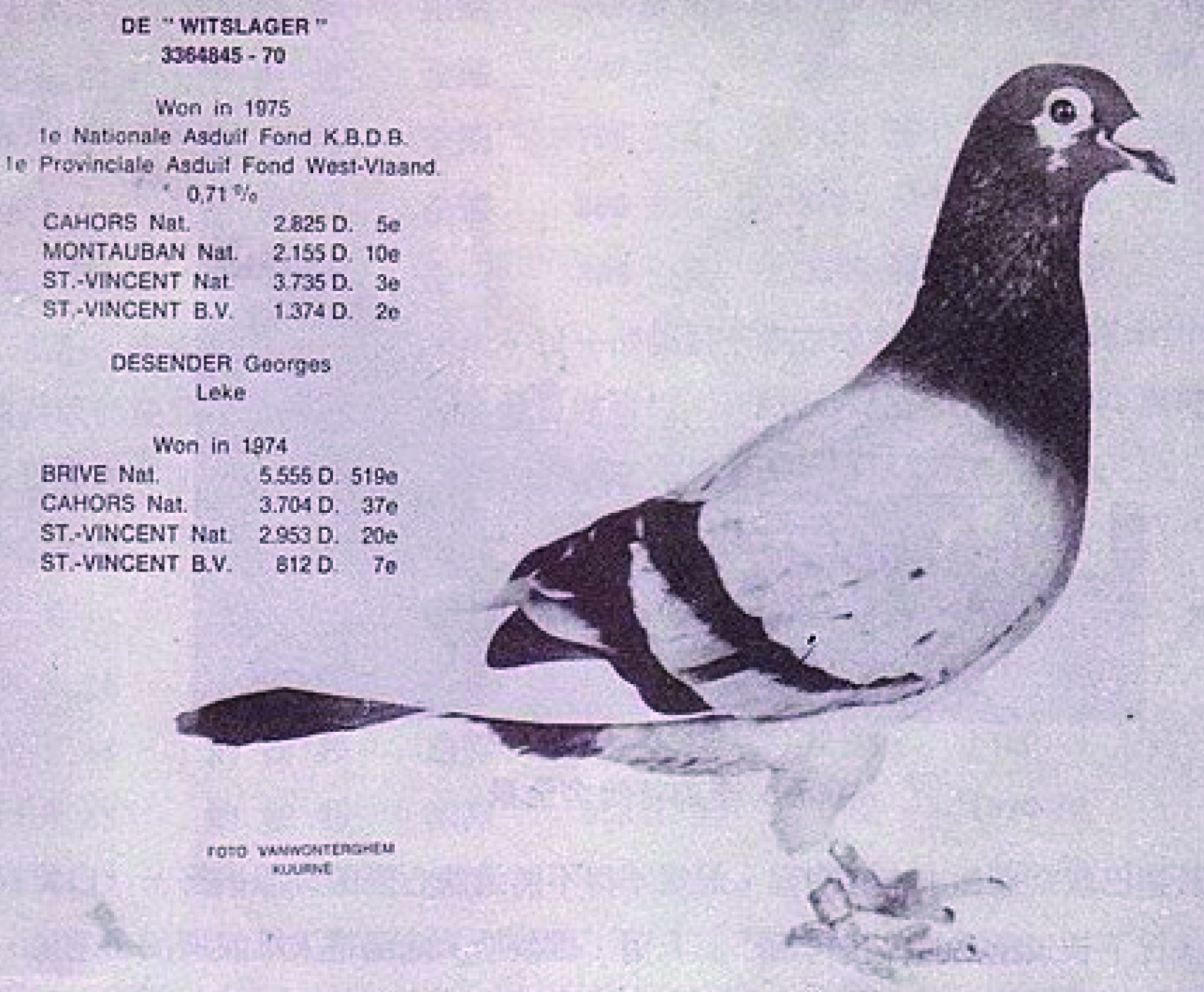 Someone told Gust that the famous “Blauwen Angoulemer” 635/67 owned by Mr. Germain Imbrecht was for sale; in all pigeon magazins, this pigeon was called “The Wonder of Bornival”

When Gust Taveirne visited Germain Imbrecht to buy this extremely good pigeon,he went back home after a while, because he didn’t have enough money in his pocket ; the price was 400.000,- Belgian francs ( 10.000,- euro ) ; Around midnight the same day, he drove back to Bornival in the french part of Belgium and put 400.000,- Belgian francs on Mr. Imbrechts table , just like with a card game…. Gust took the “Blauwe Angouleme” home and the next morning the international pigeon-world was in a kind of “shock” because what nobody had been expecting , happened! Gust Taveirne had bought the “Blauwe Angouleme” !!!! 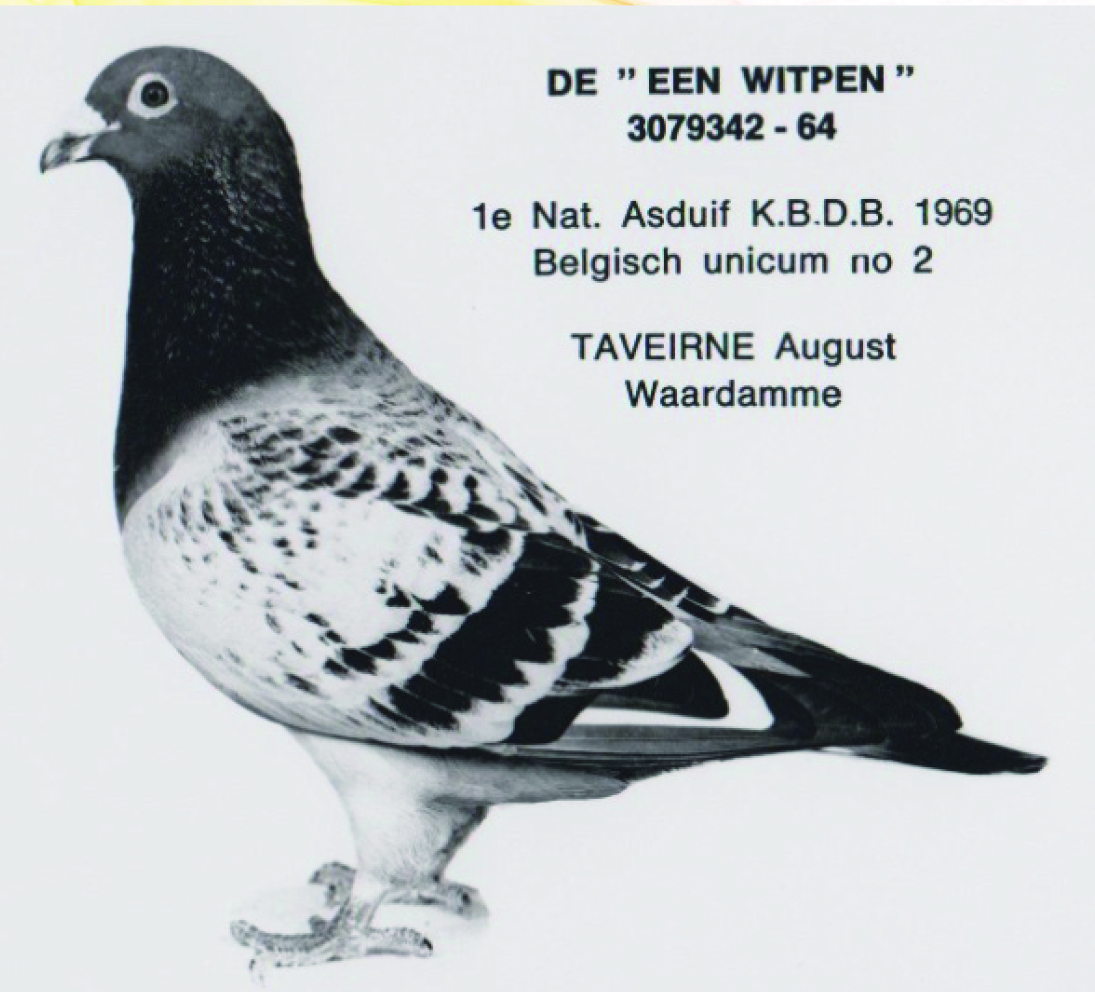 The “Eén-Witpen” 342/64 had at father’s side the following bloodlines : “Witpen”
Hector Desmet , which was a son of the worldfamous “Opgeblazene” from
Stichelbaut ! Mother’s side we find a daughter of the legendary “Figaro” from
Catrysse ! Insiders even confirmed that same “Eén-Witpen” 342/64 should have been 1° National K.B.D.B. Ace Pigeon in 1967 as well, if the owner would have enterred his results. 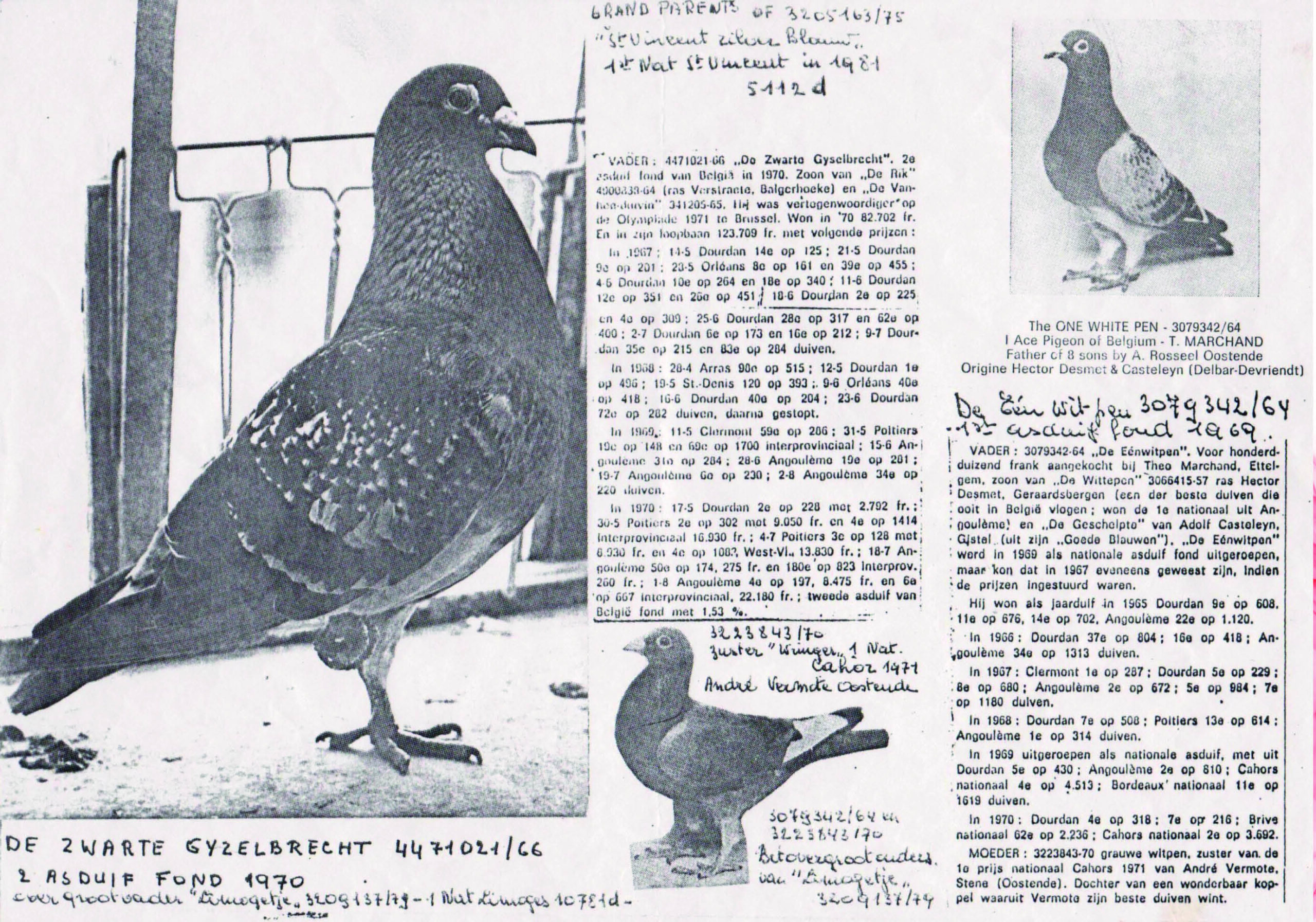 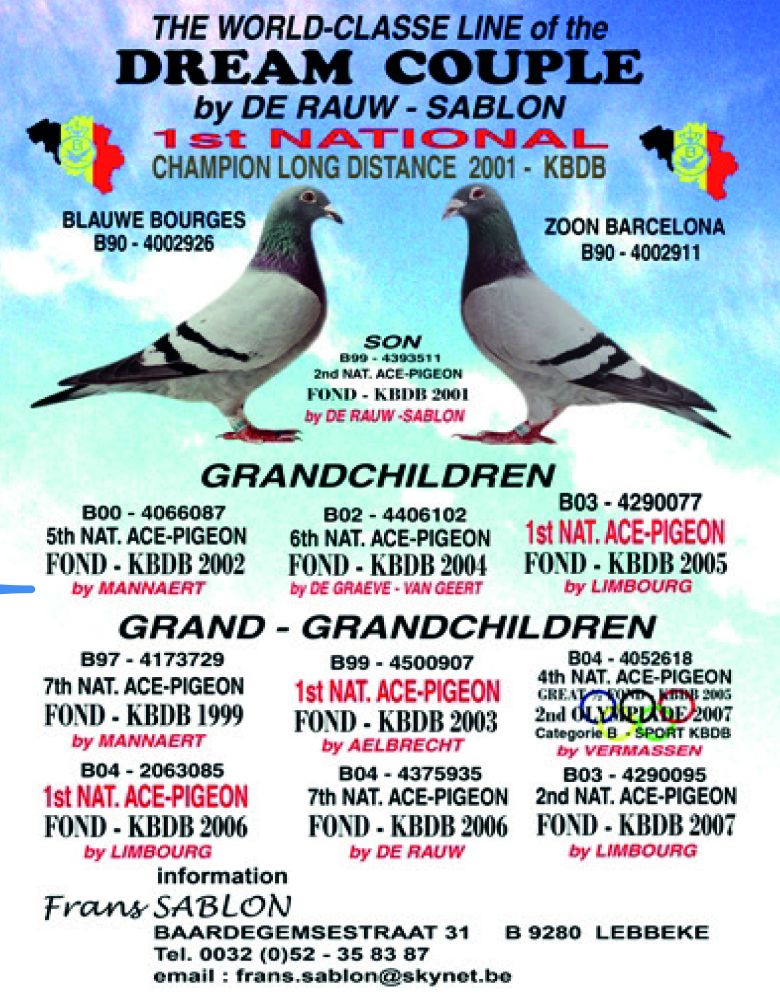 When Etienne De Rauw and Frans Sablon decided in the seventies to accept the challenge of the ‘National long distance game’ under the joint name ‘De Rauw–Sablon’, something which would directly inaugurated their ‘rush’ to the national long distance top… they thought long and hard over the stock building. Results were analysed, pedigrees werede liberated… until they finally came to Andre Rosseelin Oostende, and Jef Deridderin St.Ulriks-Kapelle. With the knowledge at the back of their minds that ACE PIGEONS descend from ACE PIGEONS, the ‘life-like’ Ace pigeon blood from Rosseel and Deridder moved to Lebbeke. By Rosseel there were descendants of the‘Black Gyselbrecht’ (2e Nat Ace pigeonlong distanceKBDB ‘70)… the ‘Eén witpen Theo Marchand’ (1e Nat Ace pigeonlong distanceKBDB ‘69)… and the line of the ‘Wringer Vermote’ (1e Nat Cahors‘71) at the basis of sensational fireworks in the long distance… this pigeon all came from the breedingloft of “Taveirne–Rigole” who were the owners of the birds and friends of André Rosseel.

By Jef Deridder it was the world famous ‘AS’ (1e Nat Ace pigeon long distance KBDB ’84) who put the wick to the fire. The crossing of the Taveirne–Rigole blood with the Deridder blood caused an enormous ‘explosion’ in Lebbeke! Because a combination of the ‘full bloods’ of botht op pedigrees resulted in the famous ‘ACE PIGEON COUPLE’, ‘famous’ in the international pigeonsport as the ‘DREAM COUPLE’ De Rauw-Sablon, formed by the ‘golden breedingpair’ ALBERT 911/90 x PAOLA 926/90! The pieces of the puzzle past together perfectly. Because generation after generation phenomenal ACE PIGEONS are still being bred up to national level. Not only by De Rauw-Sablon self, because their sport friends Marcel Aelbrecht, Jules Mannaert, De Graeve-VanGeert, David Vermassen, Louis Van Den Eynde, Freddy & Jacques Vandenheede, Johan Van Damme… and last but not least Erik Limbourg himself, were also sent towards the ‘nationalpodium’. Not many real toppers believe in the existence of ‘real breeding couples’, well… then it must be said that this ‘Dream Couple’ has to be the exception to the rule! The domination that this‘golden couple’ of breeding pigeons has demonstrated, apparently knows no boundaries… and has pigeon loving Belgium in a choking grip which it has not yet let loose.